In the first article in this series we looked at the first 3 components in developing a great return. (Click Here). These are consistency combined with accuracy, the position of the racquet head, and watching the ball properly.

Now let's move on to 3 more principles, starting with flexibility. Flexibility is a critical component in my overall teaching philosophy. And, as with all strokes, flexibility and the ability to adjust are important components of the return.

So a few general words about flexibility. Tennis is a very difficult and complex game. It requires a myriad of skills and responses.

My goal is to give my students a complete toolbox by mastering all of the shots and different styles of play. A complete toolbox enables a player to choose what strategy and tactics work best against a particular opponent and to have multiple game plans if your first game plan is not working. 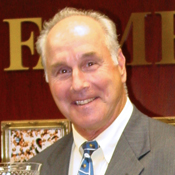 Bill Tym, a USPTA Master Professional and past USPTA national president, has been involved in tennis as a coach, player and administrator for half a century. He coached the Vanderbilt University men's tennis team to its first NCAA tournament. As a player, Tym was a Southeastern Conference singles champion at the University of Florida. He also competed on the international tour and won 10 national and international titles.