In the final on his way to a national seniors single's title, Jeff found himself doubting that he could win. See how he gave himself a dose of true belief and then his summary of the way he controlled his emotions throughout the tournament--and what it takes for the average player to begin to manage the myriad factors that influence competition.

Jeff has the cred because what he is talking about isn't only theory—it's coming from his successful competitive experience. 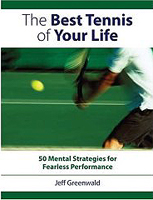 The Best Tennis of Your Life

Learn how to play with freedom and win more matches! In his new book Jeff Greenwald, an elite international seniors player, coach, and psychotherapist, outlines 50 specific mental strategies to play the best tennis of your life. See how to embrace pressure, maintain confidence, and increase your focus and intensity. Jim Loehr calls Jeff's book: "a real contribution to the field of applied sports psychology."

Jeff Greenwald, M.A., MFT is a nationally recognized sport psychology consultant. Jeff has worked as a consultant for the United States Tennis Association and trains numerous players around the world on the mental game. As a player in the men's 35 and over age division he attained an ITF #1 world ranking, as well as the #1 ranking in men's singles and doubles in the United States.

Greenwald is the author of "The Best Tennis of Your Life" published by Betterway. Click Here to order. Jeff has a private practice based in San Francisco and Marin County, California. He can be reached at 415-640-6928 or by email at jeff@mentaledge.net. You can also visit Jeff's website at www.mentaledge.net.