Pro Patterns:
The Inside Out Diagonal

Roger Federer, Pete Sampras, Steffi Graf. Some of the greatest champions in tennis history. You might think their games are completely different, and in many ways you'd be right. But they have one thing in common underlying their success: Mastery of the Inside Out position.

To a greater or lesser extent every top player plays from this position. You can see that by looking at the number of files in the Stroke Archive. Of 150 Federer forehands in the archive, Roger hits over 30% from the inside position, more than from any other position on the court. It's the same for Rafael Nadal. More than 30% of his forehands are inside out or inside in, the highest percentage of any player in the archive. Even players like Agassi or David Nalbandian who play more from the center of the court still hit 20% or more of their forehands from the inside position. (Click Here.)


Why is the inside game so critical in professional tennis? What is it about controlling this diagonal that has allowed our greatest players to dominate the sport? What do these champions know about the inside out game that we don't? This article will delineate the strategic components of the inside out position. It will instruct you how to master your own inside game. It could be the information you need to transform the outcome of your backcourt points, and the outcome of your close matches.

Why play inside out? The obvious advantage is that it allows you to use your forehand against your opponent's backhand. In general we know very few top pros have obvious weaknesses on their backhand sides, yet they still chose to move around and play a large percentage of balls from the inside out position.

Let's think about what that means from the perspective of the average player. How many club players can honestly say that that their backhand side is as strong as their forehand? In almost cases, the backhand is the weaker side. This applies to most club players, and it applies to their opponent's as well--other club players with similarly weaker backhands. How much of an advantage would it be in the average club match to use your strength to hit to your opponent's weakness as the basic diagonal in backcourt exchanges?

When you move to the inside out position, your ready position is now on the ad side, a few feet to the left of center. From this position you rip inside-out forehands crosscourt, making decisions with every shot. If your opponent can keep you close to your singles sideline, you rip it back crosscourt to his backhand. If he hits a higher ball towards the middle, you can destroy it inside in--that is down the singles side line to your oponnent's forehand. Or you can approach inside-out to his backhand.


There are many other opitions. If your opponent hits short and low, you can use your slice backhand to chip back crosscourt, again looking to maneuver for position and set up the inside in. Or you can chip up the line and attack.

The above decisions are offensive in nature. But often a quality opponent will attempt to disrupt your offensive intentions by altering your command of the inside-out diagonal. Let's go through the options to counteract these efforts.

Standing on the ad side, you appear vulnerable if your opponent hits his backhand down the line to your deuce side. At the club level, this is an illusion. Few players can hit accurately or consistently enough to hurt their opponent with a backhand down the line. When they try, they often hit short or too much to the middle. This can actually set you up to really take charge of the point. You do this by hitting crosscourt in the open court, or hitting a short forehand for a winner.

At the pro level, something similar happens, with players turning an apparent vulnerability into an offensive opportunity. Often pro players will try to drive the ball deep crosscourt to get to the backhand of an opponent in the inside position. Pete Sampras would turn this into an offensive by pattern by first rolling a high, relatively soft backhand crosscourt, and daring his opponent to hit the backhand up the line. When the opponent took the bait, this allowed him to hit his incredible running forehand, driving it crosscourt with severe pace and/or angle, or hitting down the line behind his opponent, who had moved to cover the forehand crosscourt.


Another option is to use the slice. Federer slices this ball back crosscourt short, inviting, his opponent to come to the net off a low ball against his forehand passing shot. We all know the result as Roger's forehand pass is one of the best in the game.

Steffi Graf also used the slice to set up the points playing the inside game. She would pound inside out forehands until she was far enough ahead to finish hitting inside in. When opponent's hit to her backhand, she would bide her time slicing back crosscourt hitting wide and/or short until she could go around the ball and attack with her forehand.

Alternatively, against her opponent's drives deep to her backhand, Steffi would chip down the line short, and force her opponent to hit to her forehand side, once again allowing her to employ the greatest weapon in the women's game.

Another tactic players try against the inside position is to try to hit short angles to the backhand side, usually slice. But the great inside player has developed a counterplay here by hiting his own backhand slice up the line followed by a forehand volley winner. Sampras was the master of this combination.

Your opponent has two other options. He may attempt a drop shot. This shot is risky and will likely not be a very effective tactic over the course of a match, especially on a hard court. If it is, you can hit your inside-out forehand heavier, or higher to prevent him from using that ploy.

The last option is a drive down the middle. This shot is exactly what you have been waiting for. If it is high and short enough, you can go on the attack. If it is not, then simply return it back inside-out and wait for a better ball to attack.

That covers all of the tactical options. So let's review. What are the patterns and shot combinations you need to master inside play?


With these tools you can both attack and defend the inside out position with authority and play like the masters of the game.

With this article we have now covered all of the backcourt diagonals and the corresponding defensive and offensive shots for strategic play at the baseline. In the next article, we will look at utilizing the serve and return to establish control of the diagonals at the start of the point. Stay Tuned. 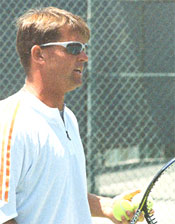 Craig Cignarelli is one of the most prolific and successful developmental coaches in the country. His original analysis of professional tactics and movement is unique in modern coaching. Based at the renowned Riviera Country Club in Southern California, Craig has personally nurtured 4 junior players from the beginning of their careers who have gone on to achieve #1 national rankings. Currently he is working with a cadre of aspiring WTA and ATP players, as well as competitive juniors at all levels. Versed in 4 languages, Craig is completing his first book "What Champions Know," which forms the basis for his articles on Tennisplayer.