My Dad and the Origins
of the Modern Forehand

A huge coil in a semi open stance. An outside backswing that looks a lot like Federer. Slight tilt of the racket tip forward at the start of the swing. Explosion up off the ground and massive forward body rotation. Very relaxed. Great forward extension.

When Jimmy Arias exploded on the tennis scene in the early 1980s that forehand was a sensation. Nick Bollettieri adopted it as a model. But how did Jimmy develop it? It came from the brain of a Cuban refugee --his dad--an electrical engineer who settled in Buffalo, New York in the 1950s. Here Jimmy tells the story—with slow motion footage of his forehand still looking great at the age of 50 something.

This month we are also featuring more footage of Jimmy’s forehand in the Interactive Forum and you can look at it there, frame by frame in high speed video. Click Here. 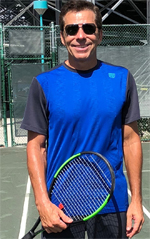 Jimmy Arias arrived at the Bollettieri tennis academy at age 13 and turned the way the forehand was taught upside down. At 16 he turned pro and by age 19 he was number 6 in the world, reaching the semi-finals of the US Open in 1983. He won 5 ATP titles, including the Italian Open, as well as the French Open mixed doubles with Andrea Yeager. Based in Bradenton, Florida, Arias works as a broadcast commentator for both ESPN and the Tennis Channel.